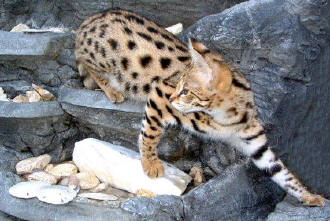 The name Savannah refers to the African Savannah the habitat of one of the breed’s ancestors the African serval cat. The breed was named by Suzie Mustacio the lady who came to own Judee Frank’s first Serval hybrid. The African Serval was at times kept as a pet by natives in Africa but is not a suitable pet for the average house hold. The Savannah is however and still has many of the Serval’s beautiful qualities but with a more amiable temperament and better house hold habits.

The Savannah breed is still very rare and has been improved by crossing with spotted domestic shorthairs. Since the Savannah cat has been accepted by TICA it can be registered in the breed section Savannah (SV). TICA allows third generation Savannah cats into cat shows for evaluation by judges.

The Savannah is a tall lean cat with long legs and a long neck. The head is smaller in proportion to the body and longer than wide with large ears. Similar to the serval the coat shows a spotted pattern with some bars on a golden to tawny ground color with a light colored underside.

Savannah cats appear to be smaller replicas of the serval. This exotic impression is accentuated by light ocelli markings on the back of the ears as well as prominent tear duct lines in the face. F1 Savannah cats can weigh more than 20 pounds and stand up to 15 inches at the shoulder. Later generations are also showing considerable size. Savannah males usually grow much larger than their female litter mates. Due to the graceful and long-legged appearance combined with the movement of a big cat these striking cats are unlike any other breed.

Shape: The face forms an equilateral triangle. The top of the triangle is the brow line over the eyes; the sides follow down the jaw bone meeting at the chin. The triangle excludes the ears. The head is small in proportion to the body.

Ears: Ears are large and high on the head; wide with a deep base and rounded tips. The inner base of the ears are quite close at the top of the head. There are ear furnishings present that rarely extend beyond the edge of the ear. Light colored horizontal bars (i.e. occelli) on the back of the ear are desirable.

Eves: The top of the eye resembles a boomerang set at the exact angle so that the comer of the eye slopes down the line of the nose. The bottom half of

the eye has an almond shape. The eyes are set directly underneath a slightly hooded brow. The eyes are moderately deep set and low on the forehead with at least one eye width apart. Tear stain markings are present along and between the eye and the nose. Eye color is considered independent of coat color; the deeper more vivid colors are preferred.

Chin: From the frontal view the chin tapers to follow the triangle of the head. In profile the chin is very shallow without much depth.

Muzzle: The muzzle is a tapered muzzle with no break. It falls within the bottom portion of the facial triangle that runs from the brow to the point of the chin

Profile: Thefore head isa straight to slightly convex curve from the top of the head to the ridge just above the eye where there is a slight change of direction and a straight to very-slight concave curve from that ridge to the tip of the nose. In profile the face also forms a triangle from the top of the eye to the tip of the nose turning to follow the jaw line and back up to the eye.

Nose: Viewing from the front the nose is wide across the top with low set nostrils. In profile there is a slight downward turn at the end giving a rounded appearance. Nose leather is slightly convex not flat.

Torso: A semi-foreign body type with a full deep rib cage and a slight but not extreme tuck-up and a rounded rump. The hip and thigh are full and long and somewhat heavy in proportion to the rest of the body.

Legs: Very long and slender yet strong. Back legs are slightly longer than the front legs and due to this extreme length may now and then give a false appearance of being cow-hocked.

Tail: Medium length and thickness not reaching the floor when standing and tapering slightly to a blunt end.

FOREST CAT WELFARE
Based in Kidderminster Worcestershire covering the Wyre Forest area.
The group is dedicated to helping abandoned and stray cats/kittens: rescuing caring for obtaining veterinary treatment where necessary and finding them new loving homes. They always have cats and kittens needing new homes so if you are seeking a new feline addition to your family in the Wyre Forest area please get in touch as below. An adoption fee is required which helps them to continue with their valuable work helping other cats.
Tel: 01562 634427

At holiday time it may be possible to arrange for a friend neighbour or relative to visit your house two or three times a day to tend to your cat. Provided such regular attention is guaranteed this is acceptable since cats prefer to remain in their own home. It is not a good idea to move the cat to someone else’s home from which it may immediately try to escape.

The alternative is to place your cat at a good boarding cattery. In choosing a boarding cattery make sure you visit the establishment first and check that the following criteria are met:

A healthy cat should display the following signs of heath:

Cats and kittens can become ill quite rapidly. This is usually characterised by lethargy and a failure to eat or drink. If your cat appears unwell for any reason consult your veterinarian immediately.

We use cookies on our website to give you the most relevant experience by remembering your preferences and repeat visits. By clicking “Accept All”, you consent to the use of ALL the cookies. However, you may visit "Cookie Settings" to provide a controlled consent.
Cookie SettingsAccept All
Manage consent

This website uses cookies to improve your experience while you navigate through the website. Out of these, the cookies that are categorized as necessary are stored on your browser as they are essential for the working of basic functionalities of the website. We also use third-party cookies that help us analyze and understand how you use this website. These cookies will be stored in your browser only with your consent. You also have the option to opt-out of these cookies. But opting out of some of these cookies may affect your browsing experience.
Necessary Always Enabled
Necessary cookies are absolutely essential for the website to function properly. These cookies ensure basic functionalities and security features of the website, anonymously.
Functional
Functional cookies help to perform certain functionalities like sharing the content of the website on social media platforms, collect feedbacks, and other third-party features.
Performance
Performance cookies are used to understand and analyze the key performance indexes of the website which helps in delivering a better user experience for the visitors.
Analytics
Analytical cookies are used to understand how visitors interact with the website. These cookies help provide information on metrics the number of visitors, bounce rate, traffic source, etc.
Advertisement
Advertisement cookies are used to provide visitors with relevant ads and marketing campaigns. These cookies track visitors across websites and collect information to provide customized ads.
Others
Other uncategorized cookies are those that are being analyzed and have not been classified into a category as yet.
SAVE & ACCEPT